This sea inlet area was created in 1802 as a result of a dike breach, which in 1623 built Black Polder flooded. The lost land has never since reclaimed more all over again. In the past two centuries, the area may develop into a particular area. The inflowing and outflowing seawater formed gullies in the former fields and put clay and silt. Here is a high arisen cope hoarse. The wind caused the remaining pieces dike were stewing by sand dunes so developed that limit the area on the seaward side. At the place where the levee breach occurred in the past, there is still a gap in the dunes. Through this opening the sea can still penetrate into the area. With water and wind every year many cubic meters of sand deposited in the area. Husky increases result in quick succession, and that again causes the area still flooded sparingly. A gradual sweetening of the area is due. 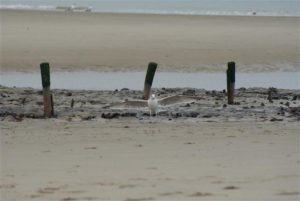 The Drowned Black Polder has a varied flora. In 1992, were established in a study 228 plant species. Besides the familiar bark of plants like sea lavender, sea aster and samphire are finding a host of rarities. Stemmed purslane and laksteeltje are the best known. This short-lived pioneer species commute annually on the marsh in search of a suitable habitat. The eastern husky is year round grazed a herd of Drenthe Heath sheep. They hold together with the rabbits in check the grass so that less competitive species can find a spot. The beautifully centaury is one of the most striking of these profiteers grazing. In the summer decorate the thousands of purple sparklers grazed the short pieces. Often the species with another dwarf: the graceful Pearlwort.

The dune thicket forming an impenetrable woody vegetation which is dominated by berry-bearing species such as elderberry, hawthorn, blackthorn, buckthorn and various roses and blackberries. On the beach side develops new dune. Sand flying up is picked up by clumps helmet and recorded. Despite the great pressure from intrusion, we find the typical plants of the coastal strip as sea holly, samphire and sea beet. For many birds the dune thicket is an excellent habitat. That was in the spring, especially early in the morning and at dusk, good to hear! All kinds of songbirds such as nightingales and stonechat breed. In the marsh area nesting plover, oystercatcher and shelduck. 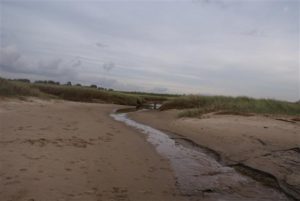 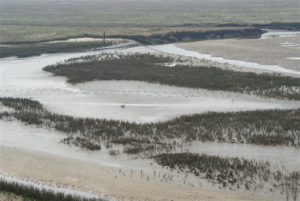 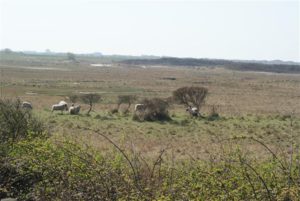