Cadzand and Nieuwvliet are known for shark teeth. These are here with the naked eye, just to find along the beach. They are the last century vacant following the shifting of the strata and the February storm of 1953. Also by the reclamation of sand from the sea to reinforce the dunes, many shark landed on the beach. Thereby Cadzand and Nieuwvliet are the place to look for shark teeth.

Previously, millions of years ago, were the places that now Cadzand and Nieuwvliet called much further south than now. In the warm sea swam animals like sharks, rays, whales, dolphins and fish of all kinds. If this were dying to sink their remains to the bottom to fossilize there.

To the beach what to increment nowadays sucks sand from the Westerschelde and spray it on the beach. In the sand are the famous fossil shark teeth and more fossils of animals that lived there previously.

Most fossils are found in the ‘Drowned Black Polder’, a nature reserve east of Cadzand, near Nieuwvliet. The fossils are from the Paleocene, Eocene, Oligocene, Miocene, Pliocene and sometimes the Pleistocene era. Drowned in the Black Polder and in Cadzand yourself be mainly the younger types with the most common shark species the Miocene ‘Isurus hastalis. Further east, towards nature ‘Zwin’ and the Belgian town of Knokke-Heist, the older teeth are more common. The most common shark species since the Eocene ‘Striatolamia macrota.

Shark teeth search is a sport that anyone can practice good eye with a couple. You must have patience and find a good spot. Below are three sites with some tips which you can find shark teeth and other fossils.

The Drowned Black Polder – In nature the ‘Drowned Black Polder will find mainly smaller shark teeth and fish teeth, fish vortices, skin spines of stingrays and other small fry. Most fossils are not here directly to the sea, but but closer to the sea than in the dunes. When you see places somewhere with lots of shells grit, it is advisable to look for there. The best reference is the radar tower in Nieuwvliet.

The Zwin – Nature Zwin is west of Cadzand. It is directly accessible over the beach and over the dunes. A good way to find here by a long beach, just along the tide line. You can find shark teeth than itself while walking.

Want to know more about the shark tooth found? What kind of shark it was, for example. Pay a visit to the visitor center of the nature reserve the Zwin. The managers know everything here.

Sharks always have a mouth full of teeth. For most species of shark, there is a number of spare teeth behind each tooth. If a tooth from the front row breaks then get it replaced with a new tooth from the row behind. The new tooth so moves up a place forward.

The shark does two weeks with a tooth and wears a few thousand during his lifetime. Since there are centuries sharks also create ample opportunity to find a shark tooth. 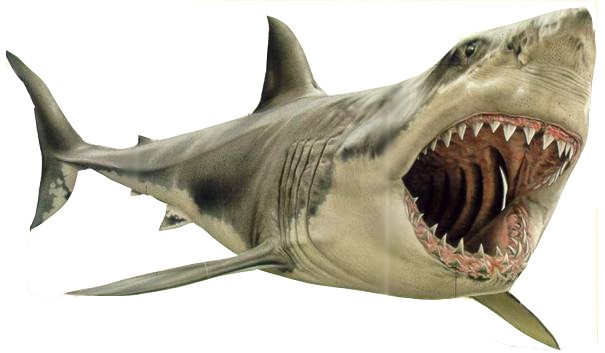